Charlotte and Ricardo are two of the nicest people you could ever meet, down to earth, super relaxed and just a pleasure to be around. Charlotte is from the UK and Ricardo from Brazil and they first met in London. This pair were so in love on their wedding day that it really did make my job a breeze.

Their intimate ceremony with close family and friends took place at the very picturesque Mullion Cove Hotel and not only were we treated with a beautiful spring day but with an incredible sunset to finish as well!

An absolutely lovely wedding to be part of, I wish Charlotte and Ricardo all the best! 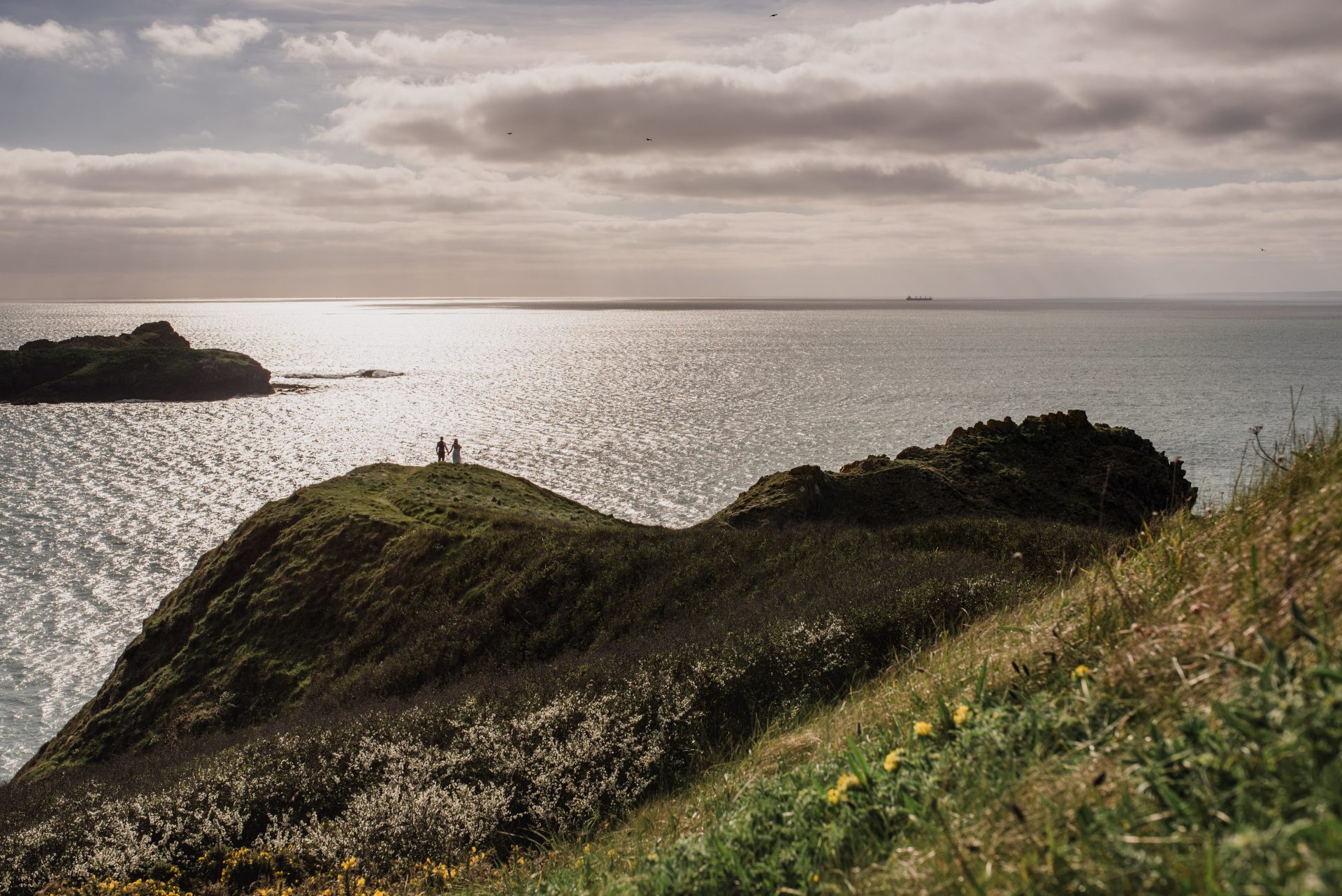 Here is their story……

Tell me a little bit about yourselves, for example, where did you meet?

We met at a gig in London in 2011 – Ricardo was an English teacher in Brazil at the time and was visiting the UK for a few weeks. I’d travelled down to London to see the gig and Ricardo and I ended up sat at the same table. We got talking and got on really well. Even when Ricardo was back in Brazil we stayed friends and talked regularly over Skype. Eventually he came back to the UK in 2015, we got engaged the following year and we’re now enjoying married life in the Midlands!

Can you tell me about the proposal?

We’d both decided to get engaged just before Ricardo had to go back to Brazil again, so we picked our favourite spot in London, just underneath Tower Bridge, and he got down on one knee! Luckily there wasn’t a crowd! We celebrated with afternoon tea in Patisserie Valerie.

Can you tell me about your venues and why you chose them?

We chose Mullion Cove Hotel on the Lizard Peninsula. I’d been coming to Mullion on family holidays since I was little so feel a strong connection with the place, and the views are just stunning! The hotel isn’t licensed for weddings so we opted for Camborne Register Office the day before, and then an intimate celebratory ceremony with family at the hotel, followed by the reception.

Were you going for a certain style or theme for your wedding?

We didn’t really have a theme or style, just kept things really simple! We did try to incorporate some Brazilian traditions though so we had some ‘bem casados’ as wedding favours which are small delicious cakes that bring luck to the bride, groom and guests.

What is your most memorable moment from the day?

We loved every minute, but I think the ceremony stood out for us – it was so emotional and what the day is all about!‬‬

Why did you choose Stewart Girvan Photography?

After googling wedding photographers in Cornwall, Stewart’s page was one of the first ones we came across. We got a really good feeling about him as all the photos were so natural yet creative, which is exactly what we wanted. Stewart also does stunning landscape photography, so it was great to get some really unique photos of the dramatic Cornish coastline in our wedding album. After speaking to Stewart and meeting him in person, we were so impressed with his friendly and professional manner and feel so lucky to have had him as our photographer!

How did you feel about having your photos taken and were pleased with your final images?

We were both pretty nervous about being in front of the camera so booked a pre-wedding shoot with Stewart at Godrevy beach, but we didn’t need to have worried – Stewart made us feel so at ease. On the wedding day we barely noticed Stewart clicking away, even though we were such a small group – he’s like a ninja! It meant all the photos were really relaxed and captured real moments. When we got the photos we were over the moon! There were so many good photos we couldn’t choose which to print so ended up making a photo book!

Can you tell me about any other suppliers that contributed and played an important part to your wedding? For example, florist, makeup artist, transport, entertainment

All the staff at Mullion Cove Hotel were absolutely fantastic – they went the extra mile to make everything perfect on the day, and the food was delicious! Nicola and Denise (Cornish Celebrants) are two of the loveliest people and helped us create a really personal ceremony (www.cornishcelebrants.co.uk) Louise from Flowers by Clowance did the most beautiful flower arrangements (www.flowersbyclowance.co.uk) Tania from Sweetcrafts who made the Bem Casados with the traditional Brazilian recipe (www.sweetcrafts.co.uk)

Do you have any advice for future couples planning their wedding?

Try not to get too hung up on the details or feel that your wedding has to compare to anyone’s. Just go with your gut feelings and whatever you choose will be perfect. And the day goes so quickly so just relax, be present and savour every moment!

Keely & Dean’s Wedding at The Alverton Hotel in Truro

Katie & Will’s Wedding on the Isles of Scilly