Oh, Jamie & Leah….were just the loveliest of couples to meet and work for!

Leah is from Australia and Jamie is a local Cornish lad from Padstow. Their legal wedding took place in Leah’s home country of Australia the year before. They hired me to look after their Padstow wedding photography at their Cornwall celebration with all of Jamie’s close family and friends. This was a small intimate wedding celebration of 30 guests, many of which were from Jamie’s side of the family, however Leah’s parents and immediate family flew over from Australia for this part too!

It was a lovely intimate wedding at a privately owned manor house in Padstow with a beautiful garden owned by Jamie’s best mans in laws! The reception followed at the Bridge Cafe and Bistro in Wadebridge, also owned by friends of theirs! They certainly have friends in the right places! Fair play!

Here is their story...

Tell me a little bit about yourselves, for example, where did you meet?

We met in a Fulham pub, Jamie moved to London after a ski season in France. I was working at the pub, but he took my job. I would visit the pub everyday to catch up with the locals and we just started chatting for several months. We didn’t start dating till Jamie moved to Richmond about 5 months later. The first date was to the park for some football the only date I ever paid for…

Can you tell me about the proposal?

It happened in Stratford upon Avon (Shakespeare’s country) we where in the Cotswolds for a 2 day getaway. We had just visited the church where Shakespeare’s is buried and Jamie wanted to go for a walk along the river. He stopped me and asked for a cuddle and then started to talk and pulled out a box and I just leaped into him and said yes. He really didn’t even get to say will you marry me! After the excitement we started to walk away and I said oops we better take a photo. There was one knee business because Jamie said he would get his pants all muddy! Than we went for a drink and texted our folks.

Can you tell me about your venues and why you chose them?

We chose Cornwall as after living in England and visiting Padstow where Jamie’s parents live, I knew I wanted an English wedding. The Bridge Bistro, in Wadebridge was chosen because the best man owns it and he offered to do the food. The opportunity of having our friends restaurant opened up a lot more control over the style, type and service of food and beverage. Working alongside both Phil, Vicky (owners) and manager Jack we were able to create the service, food and atmosphere we wanted. Jack was very flexible, organised and willing to please, he made the reception run smooth from start to finish. It’s a great place for intimate receptions. We only had 30 people for a sit down meal which was perfect for the size, then drinks and dancing next door in the bar. I wanted a garden ceremony, it happened that the best mans in laws own a manor house and consented for us using their house. Because we legally got married in Australia we did not need a resigstered venue.

Were you going for a certain style or theme for your wedding?

What is the most memorable moment from the day?

There was so many moments it’s hard to choose. But in general it was the fact it was just so relaxed, everyone had so much fun and we have never laughed so much in one day in our lives. Then we get to the food, which was the best wedding food we have ever seen, (everyone commented on this) thanks to the guys from Bridge Bistro. It’s handy when your best man is the Chef!

Why did you choose Stewart Girvan for your Padstow wedding photography?

After researching wedding photographer Cornwall, we sent various requests to do engagement shoots, we had very specific dates as we were only in England for 2 weeks for a wedding. Stewart replied and so we meet. Once meeting, going around Padstow for some engagement photos, then seeing the final product we knew booking him in for the main event was a certain. Even if it was 18th months in advance. We loved his relaxed style and non posed photos which matched us.

How did you feel about having your photos taken and were pleased with your final images?

After seeing the photos we said we didn’t even know most of them had been taken! Which is great! We love the photos, they really tell a story of our day, there are a lots of guest photos too which is great!

Can you tell me about any other suppliers that contributed and played an important part to your wedding?

We had flowers done by Roses a local florist in Padstow. They were amazing and very affordable! Make up and hair was done by Newquay hair and makeup, the bridal party all had airbrush makeup which was natural, light and lasted all day. The make up artist was flexible and used my mother’s products due to allergies. Wabebridge wines did an amazing job on the grooms mans gifts and were able to incorporate ties and individualised tastes into a set price.

Do you have any advice for future couples planning their wedding?

Be relaxed, everything works out in the end and if something has to change it makes the day more memorable and enjoyable. Make the day about what you both love, it is your party! We wrote our own vows which was special, personal and represented us as a couple. 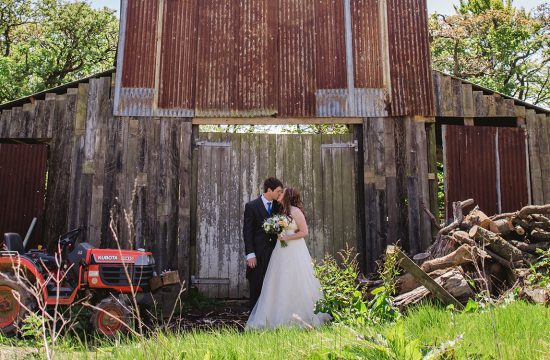